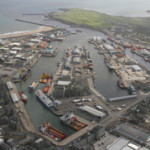 Aberdeen Harbour played host to fishery protection vessel the FPV Hirta this week to support the launch of Marine Scotland. The vessel, which entered service in 2008, docked in Aberdeen for two days, where scientists and researchers from Aberdeen’s Marine Lab had the opportunity to view the on-board facilities, marking the consolidation of Fisheries Research Services, the Scottish Fisheries Protection Agency and the Scottish Government’s Marine Directorate into a government-funded partnership, under the banner of Marine Scotland.

Aberdeen Harbour is particularly supportive of the new initiative and sees the creation of Marine Scotland as a positive step towards the sustainability of Scotland’s seas, which are a valuable commercial and environmental resource. Marine Scotland will take responsibility for marine science, planning, licensing and monitoring measures, and through Ministers be directly accountable to Parliament. Colin Parker, chief executive, Aberdeen Harbour said: “We were delighted to welcome FPV Hirta to Aberdeen to mark the launch of Marine Scotland. At the port, we view this as a significant step forward to ensuring the sustainability of our seas, now and in the future.”

In particular, Aberdeen Harbour Board hopes that Marine Scotland will help to create a clear way forward in the development of the marine renewables industry in Scotland. “The simpler and more efficient marine regulatory system will have many benefits,” continues Colin, “and we are interested to see how this will affect the growing marine renewables industry, in particular, the proposed developments around Aberdeen Bay. As a Board, we support the development of an offshore wind farm in a suitable and safe location and look forward to working with Marine Scotland on this.”

Cabinet Secretary for Rural Affairs and the Environment, Richard Lochhead said: “Our consultation showed widespread support for a new, integrated body to provide a stable framework within which business such as marine renewables can take long term investment decisions, while at the same time ensuring the thousands of species that inhabit our seas are protected. Marine Scotland will combine and coordinate the efforts of existing bodies, and will have the essential role of joining up with the UK Marine Management Organisation and others to ensure a shared, strategic approach to marine management.”