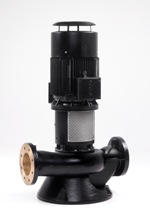 Grundfos A/S has received an order from Zhejiang Yangfan Shipyard in China to deliver 126 pumps for six 9,500 dwt multi-purpose cargo vessels for Clipper in Denmark to be delivered in 2009 and 2010. This USD 675.000 Grundfos order is the first ever placed by a shipyard, signifying a major step forward into the marine market for Grundfos A/S. Grundfos pumps are known for their high efficiency, which, in this case, was one of the major selling points. Furthermore, Grundfos efficient worldwide spare part support and its global organization were other important aspects for the order. This great leap forward to bring Grundfos’ highly power-efficient pumps to the marine market will contribute to lower emissions and hence greener ships.

The order marks the beginning of what Grundfos Business Developer, Kim Kirgegaard expects to become a very important market for Grundfos: “Our goal is to reach a turnover of more than 66m Euro in 5 or 6 years. Since the beginning of the 1990s Grundfos has been successful in delivering pumps for the marine market. So far the pumps have primarily been sold to suppliers of boilers and fire-fighting installations. Based on the great success in this part of the marine market, Grundfos has developed our product programme so that now we are able to deliver entire pump packages for shipyards.”

”Our estimates, in relation to the future turnover for pumps and pumping systems for the shipyard industry, are based on how many ships are to be built the world over for the next 5 or 6 years. We have a great advantage in our global presence; in fact, you can hardly find a harbour anywhere in the world which we cannot reach in a short time,” said Mr. Kirkegaard. He also pointed to the fact that Grundfos, in terms of technology and development, is an attractive supplier for all parties in the shipyard industry, from ship builders to ship owners as well as the sailors aboard the ships.