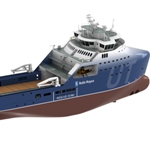 Wave piercing technology is a well-proven concept for high-speed catamarans and trimarans. Now, Rolls-Royce is bringing the benefits of this to the offshore market, with the new UT 790 CD vessel design. Rolls-Royce Chief Design Manager – Offshore Svein Kleven said: “With the UT 790 CD, we can support offshore exploration and production further and deeper while at the same time improving safety and minimizing the impact on the environment.”

The hull of the UT 790 CD pierces through the water rather than riding on top of the waves, allowing the vessel to run continuously at service speeds regardless of the sea state reducing fuel consumption and improving crew comfort. This technology eliminates slamming and allows for a smooth ride even in extreme weather conditions. At speeds of 14 knots and violent storm conditions (9m significant wave height), tank tests have shown no water above forecastle deck level. In extreme wave heights, water will be visible at the forecastle long before the situation gets critical, giving the captain an early warning which allows him to reduce power to maintain generous safety margins.

The UT 790 CD vessel is a deep-water anchor-handling vessel. Anchor handling operations in deep water rely heavily on the vessel’s stability. A main aim in the design process has been to design an inherently stable vessel that also feels instinctively stable. The vessel meets all existing regulations from the Norwegian Maritime Directorate and all latest international regulations such as SOLAS2009 and Special Purpose Vessel codes and regulations. Another feature on the UT 790 CD is the extra buoyancy in the cargo railings. This provides extra stability and safety in case of extreme heeling levels.

The engine room on the UT 790 CD has been moved astern. The new design also includes the Mecmar wet exhaust system, where the exhaust is cooled from above 300°C to approx. 60°C, leaving the saturated and cooled exhaust at sea level. The distance from the engines to the exhaust outlet ducts is then left to a minimum. With the engines and exhaust outlet astern, there are no casings limiting the view from the bridge. The 360 degree view significantly improves safety and has been high on our customers’ wish list.

Locating the engine room to the rear of the ship provides a number of benefits; engine noise is reduced and spare room for winches created at the front of the vessel. The UT 790 CD has the same fibre and rope capacity operating with four secondary winches as a traditional anchor handler has with six. The vessel has the power and capacity to handle cable, chain and rope down to 2000 m, and fibre rope down to 3000 m. With the winches mounted lower, the vessel has a low centre of gravity. Together with its 23 m width, this gives excellent stability. Even with the increased beam, tests show that there is less hull resistance than on a traditional AHTS of 20 m, thanks to the wave piercing hull shape. The UT 790 CD comes with a full Rolls-Royce Safer Deck Operations (SDO) system, including anchor handling cranes, chain wheel changer and torpedo anchor handling system. Since Rolls-Royce introduced it four years ago, SDO is now seen as standard equipment on high-end anchor handlers. The purpose of SDO is to keep the crew away from danger zones to improve safety, while maintaining operational flexibility and efficiency.

One of many new features on this vessel is the introduction of a three-screw propulsion system, combining a centre controllable pitch propeller with two azipull thrusters with nozzles. As with all other generic anchor handlers from Rolls-Royce, the UT 790 CD comes with a hybrid propulsion system. The multi-drive power electrical system gives high flexibility in different modes; From maximum power operating in anchor handling mode with both mechanical and electrical power engaged, to electrical only in dynamic positioning (DP) or slow manoeuvring mode and mechanical only in transit mode. With its special redundant drive solution, the forward azimuth thruster can be powered by two independent switchboards and not just one, and the vessel can achieve the same DP2 capability with its three thrusters instead of four in conventional solutions.