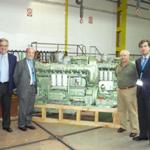 Guascor Power has manufactured two propulsion units that will be used in the engine rooms of the Nao Victoria foundation‘s ‘Galeón Andalucía’ – a real-life replica of a 17th century galleon – during its trip around the world. The first trade and cultural relations between China and Spain were established with galleons that voyaged between Spanish, Mexican and Filipino ports in the 17th century.

The two Guascor Power F180T2-SP engines feature a power output of 279 kW at 1,800 rpm each and comply with the International IMO emissions standard. accessibility to the inner workings of the engine, individual cylinder heads for each cylinder and motor-driven cooling pumps. Also included is a double control panel (in the machine room and on the bridge) that compiles and manages all safety alarms and sensors installed in the engine, required by the main classification entities. 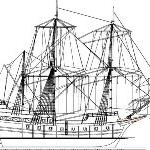 Galeón Andalucía is the fruition of historical investigation and technological innovation carried out by a group of naval historians and engineers. The replica will sail around the world during 2010 and 2011 and will participate as the insignia of Andalusia in the 2010 Shanghai Universal Exhibition (China). During her voyage, Galeón Andalucía will carry out knowledge transfer and promotion actions about Andalusia and its historic cultural heritage. It will also promote the potential innovative technical capacity of Andalusia.