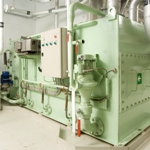 Det Norske Veritas (DNV) has just IMO-approved the biological sewage treatment plant from Gertsen & Olufsen (G&O), a leading Scandinavian developer of sewage treatment systems targeted for ships and offshore use. The revised guidelines on treatment of black water, IMO MECP 159(55) Resolution, come into effect on 1 January 2010. As the resolution entails new and significantly stricter standards, it represents a massive challenge to shipbuilders and designers. The guidelines apply to sewage treatment plants on ships of 400 GRT and above as well as on smaller ships certified to carry a crew of more than 15.

The bioreactor is purpose-built to handle wastewater from 6 to an indefinite number of persons. Due to its design, the reactor has a small footprint and limited weight. It can be delivered in mild coated steel, stainless steel, and in Duplex. Besides the range of tailor-made standard units, split versions which are ideal for retrofits are produced according to the ship owner’s demand.

”We are proud to receive the approval. Our bioreactor represents the next generation of biological sewage plants and is designed to handle all kinds of human wastewater from any vessel or offshore platform. And on top of now being on par and even better than the 2010 guidelines, the plant is as environmentally friendly as they come. It works with UV-light sterilization and uses no chemicals in the process,” said Thorsten Larsen-Seul, managing director with G&O. ”I believe that biological wastewater treatment will play an even more significant role in the years to come.”

Among the foreseeable future demands are treatment guidelines for grey water. Today, grey water from e.g. cleaning and showers stemming from the onboard households is dealt with only in the Alaskan guidelines, but many more countries and areas with equally sensitive ecosystems are sure to follow. ”The Bioreactor can handle both black and grey water, the latter including complete degradation of organic matters including fat and grease. A sewage treatment plant including a Bioreactor tolerates organic and hydraulic shock and peak loadings,” said le Fevre.