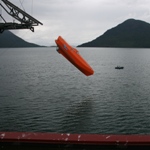 Leading lifeboat and davit manufacturer Schat-Harding has completed the first freefall drop with its new design of lifeboat for the offshore sector, the FF1200 which, according to the manufacturer, sets new standards for freefall boats. Schat-Harding CEO Ove Roessland: ”We were acutely aware that, in order to satisfy regulations applying to the Norwegian offshore sector, it was necessary to design a completely new lifeboat. Now, after several years of research and development, and the successful completion of high-scale module testing, we have produced what we regard as the safest lifeboat ever developed by Schat-Harding.”

The 70-person, 33 m-drop FF1200, with its streamlined design, is larger and stronger than other freefall lifeboats on the market, and its engine power is three times greater than anything seen in the Norwegian offshore sector over the last ten years. Roessland explains: ”We have given the FF1200 project high priority within the company. It was vital for the offshore industry and its workforce that we built a lifeboat which generated confidence in freefall evacuation, and that is what we have done.”

Schat-Harding has already received ten orders for the FF1200 from BP and Talisman Energy. The first craft will be delivered to Talisman`s YME development project in third-quarter 2009.