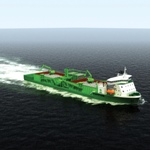 Vacon will deliver via its global system integrator partner Imtech Marine & Offshore two 4.6-MW diesel-electric main propulsion drives to Tideway‘s newbuild high-tech fall pipe rock dumping vessel Flintstone. This is the largest single order to date for Vacon’s office in Belgium. “Imtech Marine & Offshore is a key system integrator which provides this special vessel with the diesel-electric propulsion as well as energy generation, distribution and automation. We are very pleased to supply AC drives for controlling the 2 x 4.6-MW diesel-electric propulsion — which, in the Vacon Group’s history, is so far one of the largest AC drives deliveries for main propulsion,” says Daniel de Coster, Managing Director of Vacon Benelux NV/SA, Vacon’s office in Belgium. Built for DEME subsidiary Tideway. Imtech Marine & Offshore will also deliver a dynamic positioning and dynamic tracking system on the Flintstone. The rock dumping vessel will be constructed at the Sembawang shipyard in Singapore and will be operational in 2011.

The Vacon AC drives needed for the diesel-electric propulsion will be two sets of Vacon’s 4.6-MW liquid-cooled AC drives and two 900-kW liquid-cooled AC drives. They will be controlled by Vacon DriveSynch, an innovative concept for running high-power AC drives in parallel. The Vacon DriveSynch provides a high degree of redundancy by allowing the control of one motor by means of 2 to 4 AC drives of 100 – 2,500 kW each. The Vacon DriveSynch is suited for the control of single and multi-winding AC motors. The total installed power of the fall pipe rock dumping vessel is 13,000 kW. Diesel-electric propulsion is an eco-friendly system, allowing significant reductions in fuel consumption and environmentally harmful emissions. Additionally, ships which are equipped with this kind of technology are more manoeuvrable and produce less vibration on board resulting in less noise pollution.