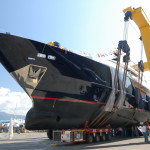 Two long standing Sanlorenzo owners, a father and his daughter, celebrated the launch of their new semi-displacements yachts. The father is the owner of the stunning SD122-FX and the precious SD92 (Telli 3) is for his daughter. Both GRP navettas were projected and produced in the Viareggio Division and were launched on the same day in June. The Sanlorenzo navettas, elegant and technologically advanced, stand out in the yachting world for their layout, which perfectly combines modern lines with evocative forms, recalling the great transatlantic liners of the 30s. L’ SD92–Telli 3, 27 m in length and with a 7.15 m beam, represents the ninth SD92 hull delivered by Sanlorenzo since the debut of this new model in September 2007. L’ SD122–FX is 38 m long and has an 8m beam. She is the flagship of the navetta line and the second of the four SD122 hulls sold by Sanlorenzo in the last 11 months. Sanlorenzo exclusively focuses on the production of tailor-made motor yachts according to the requirements and style of every single owner.