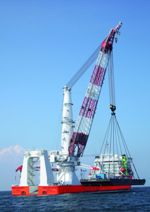 At the end of June, Liebherr delivered the first heavy lift offshore crane type MTC 78000 straight from its manufacturing plant in Rostock. The MTC 78000 is one of the biggest offshore slewing cranes worldwide and achieves a maximum lifting capacity of 1,600 t at 35 m. Four units of the new heavy-lift crane have already been ordered to date. The first one is installed on the heavy load vessel OSA Goliath, built for Mexican company Oceanografía. The OSA Goliath is one of the largest heavy load vessels worldwide and is being used for platform reconditioning, pipe laying and to set up offshore wind power plants.

With its new MTC 78000 Liebherr heavy lift offshore crane, the OSA Goliath is scheduled for working in the Gulf of Mexico on behalf of the Mexican oil company Pemex over the next several years. Two further Liebherr offshore cranes type CBO 3600-100 are also part of the order. These two cranes will be used as auxiliary cranes as well as for supply hoists.

The size of the MTC 78000, which is derived from customer requirements, represents a new dimension in product development for Liebherr. At its maximum lifting capacity the crane is still able to slew over 360°. At a maximum radius of 74 m for the main hoist the crane achieves a lifting capacity of almost 530 t. The boom length of the crane currently delivered is 87 m. In addition to the main hoist, the MTC 78000 offers two auxiliary hoists with lifting capacities of up to 500 t and 50 t respectively. The deadweight of the new heavy-lift offshore crane is 1,420 t without the base column which weighs approximately another 300 t – depending on its design.

The crane’s design is characterized by state-of-the-art drive technology. The drive concept is based on an electro-hydraulic drive with 8 x 500 kW or 4 MW power. The two main winches offer a line pull of 500 kN (50 t) with a rope diameter of 48 mm. The standard equipment of the MTC 78000 features the proven Litronic control system with integrated display of load and radius as well as automatic load moment limitation. This is completed by special overload protections which are either activated electronically. The crane’s auxiliary hoist is fitted with a constant tension system exerting a tensile force on the hoist rope in case of significant wave height, thus ensuring that the hook follows the moving load