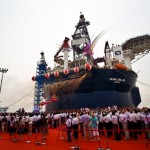 The naming ceremony of the Sevan Driller, the world’s first cylinder-shaped ultra-deepwater drilling rig, took place on 28 June 2009 at Cosco Qidong Shipyard, Jiangsu Province, China. Sevan Driller was named by the godmother Madam Feng Jiping, wife of Cosco Group President Captain Wei Jiafu. About 400 guest from the shipyard, clients, shareholders, investors, financiers and other parties were present. The Sevan Driller is designed to include the most advanced drilling capabilities in the industry, based on Sevan’s own patented technology. It will have a capacity of drilling of wells up to 12,190 m in water depths of up to 3,048 m, a variable deck load of more than 15,000 t and high storage capacity of bulk materials. It will be equipped with an internal storage capacity of up to 150,000 barrels of oil. The Sevan Driller will work for Petrobras in the Santos Basin off the Brazilian coastline.