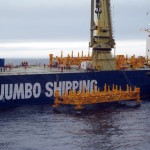 On June 20, Technip, supported by Jumbo Offshore, completed the installation of four subsea structures, including two module support frames, in the White Rose oilfield, offshore Newfoundland for the North Amethyst project. The foundations were lowered to the Grand Banks seabed at approximately 120m depth and will support subsea manifolds and flowlines that are part of a multiple well tie-back. The offshore works were designed as a coordinated programme of tasks centred on the crane capacity of the Jumbo Javelin, but controlled by subsea survey and work class ROV operations based on one of Technip’s vessels, the Deep Pioneer. After mobilization in Bay Bulls – where the several structures ranging from 30 to 150 t were loaded – the Jumbo Javelin sailed to the White Rose field where all the foundations were successfully overboarded and installed on the seabed. Both of the vessel´s 900t Huisman mast cranes were re-reeved from a 16-fall to a 4-fall configuration. This way, a depth of 120 m could be reached easily. This operation required both vessels to work in close proximity of each other and hence rely on their GPS controlled DP2-systems. First oil from the extensive North Amethyst project is expected to flow at the end of 2009.