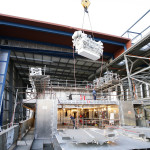 While Sea Force One, the first Admiral 54 superyacht built by AMY, keeps on receiving great appreciation from worldwide press and public, her 54 m sister ship is under construction at the Genoa facilities. The high resistance steel hull and the light alloy aluminium superstructure are already completed. In projecting and building all parts, particular attention was given to have the least deformations in welding: results were excellent and allowed less employ of filler and a sensible reduction of painting timings. Designing the manufacturing plants was very accurate and 90% of them are already on board. Worth to note, piping and airtight closures have been realized according to shipping construction criteria, brand new for the yachting industry. The two Caterpillar 3516B engines are already on board. The AMY workers are currently working on the engine room, whose optimization of the space volumes was studied in details during the project stages.

Designed by Luca Dini and built by AMY, the ship has a sleek and imposing silhouette, without the lateral rounding of the superstructure as seen in the first Admiral 54. The ship is decorated with doors equipped with platforms with hydraulic openings which lower down to create real balconies. One is at the level of the main hall and the other two are in the owner’s cabin. The traits of the Admiral 54, both displacement and planning, are the following: stern hatch which opens as a platform over the sea, offering a guest area on the sea for sunbathing or fitness; the garage which holds the tender on one side, equipped with a crane for loading and launching it, and the central instrument holding mast which increases space on the sun deck. Interior layout, which carries the signature of Luca Dini, is very traditional: twelve passengers in six cabins, twelve crew members, four bridges. Particular attention has been paid to the absolute comfort of guests on board, thanks to stringent standards for soundproofing and noise reduction. Powered with two Caterpillar engines,  the yacht reaches 17.5 knots max speed and achieves a range of around 5,000 nautical miles at economical speeds. The Admiral 54 obtained the RINA International Certifications and the new RINA Green Star Certification,  that assures compliance with the strictest regulations in terms of environmental protection while in no way compromising on the freedom of navigation. Delivery is scheduled for delivery in Summer 2010.