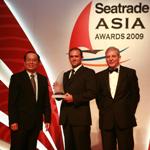 At a ceremony held at the Pudong Shangri-La in Shanghai on 25 June and attended by 600 guests from the maritime industry, Wilhelmsen Ships Service was named winner of Seatrade Asia’s 2009 award for best ship agent. The Ship Agent Award is given each year to the ship agent who exemplifies the industry specific criteria upon which it is based: customer service and efficiency and new services offered. The other nominees for the award included GAC, Samsara and Jardine Shipping Services. Receiving the award on behalf of Wilhelmsen Ships Service’s Asian organization was Neal de Roche (centre), Area Director North East Asia. On the left is Roger Tan, Managing Director (Tianjin) PSA International; the Chairman of Seatrade, Christopher Hayman, is on the right. Mr De Roche commented that the award is a strong testimonial to the quality of the company’s ships agent services.