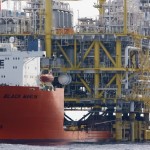 Dockwise has successfully performed the USD 33 million complete transport and float-over installation of 19,000t MDPP offshore production platform for CPOC located at the JDA Block B-17, C-19 and B-17-01. Dockwise is the main contractor for CPOC, the operator. Preparation for the project included custom-design and fabrication of Leg Mating Units (LMUs) and Deck Support Units (DSUs), mating and mooring analyses and synchronization of transport, structural, marine and installation engineering expertise. After outfitting the Dockwise vessel Black Marlin, with grillage and skidbeams, as well as additional steelworks the giant MDPP module was skidded on board at the Sembawang Yard In Singapore. After the completion of the load-out and sea-fastenings, the vessel departed for offshore location where the float-over installation took place. “The float-over operation itself was carried out in environmental conditions that were close to those calculated as the limit for a safe operation; Wind 15 – 20 knots and decreasing after 3 pm, sea and swell approximately 1.0 m significant but with a short period that hardly caused any motions on the Black Marlin”, says Herman van Raaphorst, Dockwise Director of Projects. Once the mating wires were connected, the load transfer took six hours to complete. Dockwise was audited during the execution of this project and as a result has been nominated for the ISO 14001 and OHSAS 18001 certification by Lloyd’s Register Quality Assurance. These certificates are in addition to the ISO 9001 certificate for Dockwise Shipping. The certifications confirm the company’s commitment to continuous improvement regarding safety and environment in the activities.  André Goedée, CEO of Dockwise commented: “All in all, this project is a milestone in the history of Dockwise, whereby the company has performed this float-over directly for two major National Oil Companies. Dockwise has successfully managed the entire project from start to finish and provided the client  with a reliable, safe and cost efficient operation.”