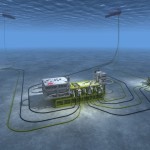 FMC Technologies, Inc. has been awarded a contract by Petrobras to supply a subsea separation system for the Marlim field, located in the Campos Basin, offshore Brazil. The contract is valued at approximately USD 90 million in revenue to FMC Technologies. FMC’s scope of supply consists of a subsea separation and pumping system. The subsea separation module will separate heavy oil, gas, sand and water at a water depth of approximately 900 m. The system will apply FMC’s separation and sand management technologies, utilizing a novel pipe separator design, licensed and developed in cooperation with StatoilHydro. It is the first deepwater deployment of subsea separation technologies in a mature field, and the first separation of heavy oil and water in a subsea environment in the world. It will also be the first separation system to include subsea reinjection of water into a reservoir to boost production. The equipment will be jointly engineered between FMC’s operations in Brazil, Norway and the Netherlands. Final manufacturing and integration activities will be performed at the company’s Rio de Janeiro facility, with deliveries projected to begin in 2011.