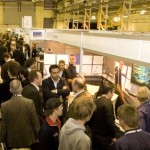 On Thursday the 8 October the second edition of the trade fair and seminar Offshore Energy will take place in Den Helder, the Netherlands. The Old Navy Yard Willemsoord in Den Helder was chosen again as the location for the exhibition. The organization is expecting more than one hundred exhibitors this year and has increased the exhibition floor. Almost ninety companies have already signed up as exhibitors, including major offshore companies such as Cofely Oil & Gas, Vroon Offshore Services, Damen Shipyards Group, Workfox, Kongsberg Maritime Holland and Peterson SBS. It is also good to see that many companies that were at the exhibition as visitors last year have chosen to exhibit this year. It shows that the offshore sector, despite the economic crisis, is still going strong.

The second edition of Offshore Energy can once again depend of the support of several branch organizations. In addition to the IRO, Holland Shipbuilding, NOGEPA and the Organization of Dredgers support the trade fair. A trade delegation from NOF Energy, the branch organization of the United Kingdom, will be present at the exhibition to lay down and strengthen the foundation for international trading contacts in the branch.

Like last year, this edition will also feature an interesting seminar programme that will take place in Studio 62, chaired by Mr. Hans P. de Boer, director of IRO. The programme is yet to be decided on but, among others, Wagenborg Offshore, Technip-EGP and TNO will be conducting a lecture. The seminar contains lectures with various subjects such as recent developments in the offshore and energy industries, various topics on research in the offshore sector and the investments and technological developments in the field of sustainable energy onshore and offshore.

Offshore Industry will also exhibit at Offshore Energy. We will be pleased to meet you at our stand!