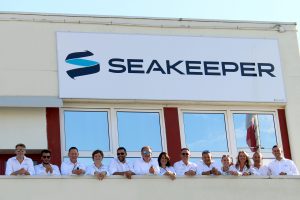 Seakeeper, one of the leading companies in marine stabilisation, announces the grand opening of its new office in Lavanga, Italy, the first European office for the company. The company’s European sales have increased an average of 30% annually over the past three years, with an anticipated 40% growth for the 2017-2018 fiscal year.

Not only will the new office location serve to help with increased growth in the region, it will also act as a spare parts distribution center. The service team will be able to more quickly assist customers in Europe, Asia and the Middle East, cutting shipping time and costs. Previously, all parts were shipped as needed from the Mohnton, Pennsylvania factory. “The European market has been vital to Seakeeper’s success,” says Andrew Semprevivo, Seakeeper’s President & CEO. “The new office is going to allow our team to provide an even higher level of support to the region and to continue the trajectory of growth we have experienced in the past five years.” The office will be staffed with sales, service and marketing personnel. The new location will also include a large room for conducting technical trainings and a warehouse for spare parts.

Current openings in the Italian office include positions for a field service technician and demo boat captain, with more opportunities planned for the future. Most recently, Mr Paolo Berardi joined the team as Southern European Sales Manager. With years of experience in marine industry sales, most recently serving as a Sales Engineer for Promat, he will oversee OEM and refit sales in the Southern European market.