Seven Refits for Huisfit During the Winter Season 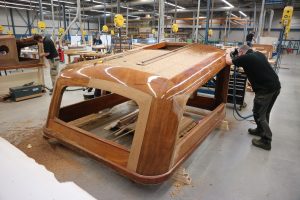 The team of Royal Huisman’s dedicated department for refit, repair and renewal is pleased to announce that the sailing yachts Wisp, Yonder and Foftein signed up for various commissions. These new projects will be undertaken as part of the seven refits in total benefitting from Huisfit’s expertise during the coming winter season.

Last summer, Eos and Athena, both returning clients and two of the world’s largest sailing yachts, booked in for major refits by Huisfit. Both yachts have now arrived in Holland and work is well underway at one of Royal Huisman’s flexible deep-seawater locations.

All is progressing on schedule; the servicing of Athena’s main engines and generators is nearly ready and half of the original teak deck has been removed. Last week she was hauled out and moved into her ‘Huisfit home’ for the coming winter.

Eos’ Rondal rigs have been removed for inspection and re-painting, and the yacht is scheduled to be re-located into her covered hall shortly, after which her Huisfit 2018-2019 can proceed at full speed.

The Frers-designed Royal Huisman sloop Spiip has also arrived in Holland for Huisfit. The team has been assigned to undertake service work and various electric and electronics upgrades during a short stopover in Holland, to where Spiip travelled after a beautiful summer cruise in Scandinavian waters.

Last, but not least is the legendary Herreshoff-built Vagrant. This classic schooner of 39m (overall incl. bowsprit) – launched in 1913 – is currently completely being rebuilt at the shipyard in Vollenhove.

Vagrant’s owner clearly briefed the team to reconstruct Vagrant’s magnificent elegance and style, inside and out, with the utmost respect and care for Vagrant’s appearance which reflects the past decades of ownership, but also to re-engineer her with the most advanced quality materials and board systems for sensible, effortless and safe operation.

The yacht was fully stripped upon arrival at the Royal Huisman facilities before her 33m over-a-century-old steel hull was sandblasted. All of the numerous individual rivets were fixed by welding to avoid potential deformation and leakage. A quantity of steel plating was also replaced to preserve Vagrant well into the future. The installation of the new main engines, generators and Royal Huisman-engineered board systems in the technical spaces below the accommodation is nearly ready.

Most of the existing classic luxury interior was repaired and restored by the shipyard’s joinery team, whilst new crew accommodation was built in parallel. All existing deckhouses, superstructures and skylights have been removed and updated by Royal Huisman. Currently they are being re-installed on the all-new teak deck. Although Huisfit-projects are never a typical refit, the scope of this project is widely regarded as a new build, both by those involved at the yard and by observers elsewhere.

The re-launch of Vagrant is scheduled for the spring of 2019, and will be followed by sea trials and the final testing of her sailing systems and new in-mast-furling aluminium Rondal masts. As a result of this extensive Huisfit, Vagrant and her magnitude will be preserved well into the future. And thanks to her owner’s vision and respect for her legacy, Vagrant will not become a piece of forgotten history but instead, will remain a living legend – sailing and enjoyed by many for decades to come.