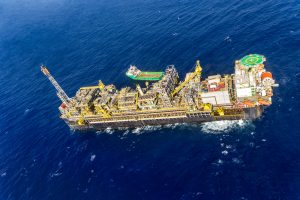 Petrobras reports it started today, with its partners of the BM-S-11 Consortium, the production of oil and natural gas through P-67 platform, in the Lula Norte area, in the pre-salt of Santos Basin. With capacity to process up to 150 thousand barrels of oil and compress up to 6 million m³ of natural gas per day, this is the ninth unit set up in the BM-S-11 block, in line with the company’s Strategic Plan.

The type FPSO platform is located at approximately 260km off the Rio de Janeiro’s state coast, at a water depth of 2,130m, and will produce through nine production wells, in addition to being interconnected to its injection wells. Drainage of oil production shall be through lifting vessels, while the production of gas shall be drained by the routes of the pre-salt gas pipelines.