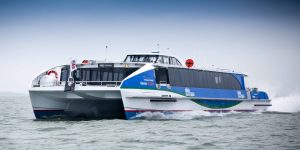 UK shipbuilder Wight Shipyard Co has completed its third and largest vessel for MBNA Thames Clippers, the first Hunt Class Mk3. The 38m Venus Clipper has been built to a ten-month build schedule and is reflective of the increased business the yard has previously predicted in the fast ferry sector.

MBNA Thames Clippers had some very particular requirements for its latest newbuild. Importantly, the new Clipper had to be able to transport of passengers between numerous floating piers at a speed not less than 25 knots at full load draft. The vessel’s catamaran hullform uses twin symmetric hulls and has been designed by Australia’s One2three Naval Architects. Its hull structure is designed for frequent and repeated berthing at London’s floating piers with particular attention paid to potential contact with obstructions in the water and harsh weather conditions.

Venus Clipper is classed by Class Lloyds Register / DNVGL and obtains the notation DNVGL +1A1 HSLC Passenger R4 HSC (A) EO meeting the delegated survey requirements for capacity and seating for a minimum of 220 passengers, with space for two wheelchairs.

The two main diesel engines are Scania DI16 077M’s, fitted one to each machinery space, rated to 662kW (900hp) @ 2300 rpm. They are of the four-stroke water cooled type, turbocharged and with charge air cooling. With regards to propulsion, the vessel is equipped with two Rolls Royce/Kamewa 40A3 waterjets fitted to each hull. The waterjet system comprises RR/Kamewa proprietary control and monitoring system complete with docking joystick and backup controls. To complete the power and propulsion system, there are two ZF2000 series reversing marine gearboxes fitted, directly coupled to the main engines.

Arrangement of the wheelhouse is in accordance with Survey Requirements having all round vision for safe navigation in confined waters and frequent berthing. The outfit includes forward control and monitoring console incorporating all engine and waterjet controls, alarms and navigation equipment, monitoring panel and electrical panels.

External vinyl wrapping by Indigo Graphics was chosen instead of paint because it is so much lighter.

With a high emphasis on safety, the vessel is equipped with two Zodiac 151-person open reversible life rafts, fitted in forward position with two RFD Ferryman 30 and 85 person open reversible life rafts in aft position. Both yard and operator had to complete a safety evacuation test as a standard requirement for a first in class vessel. The drill required at least 110 passengers safely disembarked onto lift rafts within 17 minutes, which it passed with flying colours achieving evacuation in just 12.

Wight Shipyards is thankful to its neighbours Aluminium Marine Consultants for its support with the build.