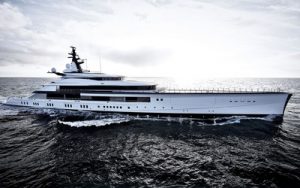 Oceanco’s recently delivered 109m motoryacht, Bravo Eugenia, won the award in the category Technology and Innovation on 28 March at the Yacht Club. This newly conceived award is based on the Yacht Club of Monaco’s fundamental values and criteria, which include Naval Etiquette, Preservation of the Ocean and its biodiversity, and Technological Innovation.

Bravo Eugenia, Oceanco’s first LIFE-designed yacht, developed in collaboration with Lateral Naval Architects, is characterised by its lengthened waterline, innovative layout, fuel-efficient hull design and integration of ecologically conscious technologies. The LIFE Design not only adds a slender elegance to the yacht, but also leads to a reduction in the overall demand for propulsion power. As a result, the engine room is condensed to a single tier – a rarity in large yachts. This affords additional room for lifestyle areas – particularly on the lower deck, where space is usually restricted.

Bravo Eugenia is developed with an optimised hybrid propulsion system that utilises the latest energy-saving technologies and benefits from best-in-class hydrodynamic efficiency, new heat and energy-recovery systems, and integrated battery systems to allow for optimal operation at all times. Not only is this pioneering system extremely powerful, it is also environmentally friendly, boasting a reduction in fuel usage of up to 27%. It meets all existing ECO notation requirements and is able to operate in all emission control areas thanks to its diminished emissions. Additionally, an exclusive whisper mode has been built in to ensure surrounding yachts are not disturbed when entering and exiting ports.

HSH Sovereign Prince Albert II, President of the Yacht Club of Monaco, presented the Explorer Award to Marcel Onkenhout, CEO of Oceanco—who accepted the award on behalf of Bravo Eugenia’s American Owners, Gene and Jerry Jones. The international award jury, chaired by the renowned explorer Mike Horn, included the President of the American Explorers Club and President of the Société des Explorateurs Français.

In the same way that the Yacht Club of Monaco is dedicated to upholding the values of ocean conservation, biodiversity and technical innovation, Oceanco is commited to building yachts with the same philosophy. Oceanco is grateful to the Jones family for its vision, courage and trust in enabling Oceanco to create its first yacht according to the LIFE Design qualities — a yacht for the future that adheres to the principles outlined by the Yacht Club of Monaco and which speaks to future generations of yacht Owners.