OTC Houston 2019: Focus on the Future 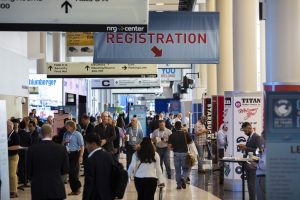 Offshore energy professionals from around the world attended the 2019 OTC – the 50th anniversary – at NRG Park to gain insights from global experts and colleagues. While speakers challenged ideas about the changing landscape of exploration and production, exhibitors displayed the impact of technology and digitalisation on the science of energy supply and demand management.

“There were many measures of success for this year’s edition of OTC, and while it is exciting that attendance was above average for the event, I am even more gratified by the diverse representation of geographies, industries and topics”, OTC Board of Directors Chairman Wafik Beydoun says. “Beyond the hundreds of technical sessions and networking opportunities available, this year we featured numerous thought leadership discussions with energy executives, including an expanded global reach in our new Around the World series.” From an international viewpoint, the inaugural Around the World Series offered analysis of offshore growth in nine featured countries—among them Mexico, Guyana and Ghana—and opportunities for investments and licensing.

OTC 2019 welcomed 15,281 attendees from outside the United States, a number that has increased for the last three years. Attendance from dignitaries, such as Korean Prime Minister Lee Nak-yon who visited the Korean Pavilion, further emphasises the global reach of OTC. Celebrating 50 years since its inception in 1969, OTC 2019 spent equal focus on the next half-century. The opening general session featured ‘The Next 50 Years of Offshore Developments’, in which nine executives provided perspective on ensuring businesses are more resilient to face future challenges and adapting to an increasingly digital landscape. “This year has been unparalleled in terms of showcasing the new technology that is driving our industry, both in efficiency and innovative solutions”, Mr Beydoun says. “OTC continues to evolve in response to our changing world, this year including fourteen sessions dedicated to offshore renewables, which just further reinforces that this is not only the largest but the most impactful energy conference in the world.”

This year’s conference spanned more than 52,000m2, with major equipment installations, holograms and interactive displays actively engaging 59,200 attendees from over 100 countries. More than 2,300 exhibiting companies from 40-plus countries showcased the future of offshore activities. There were 328 new exhibitors, and international companies made up 52% of total exhibitors. The OTC Golden Anniversary Gala Dinner raised EUR269,000 for Spindletop Charities, which provides programs for at-risk youth. OTC also recognised its Distinguished Achievement Award recipients: Carlos Mastrangelo for individual achievement, the ExxonMobil-operated Hebron Offshore Project for institutional achievement and a Hoover Medal for David Baldwin.