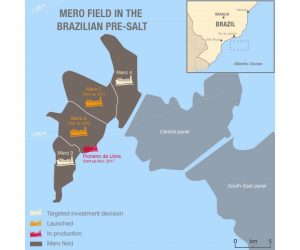 Total and its partners have taken the investment decision for the second phase of the Mero project (Libra block), located deep offshore, 180km off the coast of Rio de Janeiro, in the prolific pre-salt area of the Santos Basin in Brazil.

This decision follows the production start-up on the field in November 2017 (Early Production System) and the launch of the first phase of the project (Mero 1) approximately a month later. The Mero 2 FPSO will have a liquid treatment capacity of 180,000 barrels per day and is expected to start up by 2022.

“The decision to launch Mero 2 comes as a new milestone in this large-scale project that will develop the giant oil resources of the Mero field, estimated at 3 to 4 billion barrels”, declares Arnaud Breuillac, President Exploration & Production of Total. “The Libra Consortium can leverage the excellent productivity of the field to develop a major oil project with technical costs below 20 dollars per barrel and low breakeven. The Mero project will contribute to the growth of the Group’s production from 2020 onwards. Once the full potential of the field is developed, production should reach more than 600,000 barrels per day.”

The Pioneiro de Libra FPSO, which has a capacity of 50,000 bopd and came on stream in 2017, is producing as expected while providing valuable information on the field, reservoir and productivity of the wells. The Mero 1 project, currently under development, is progressing as per plan with a start-up scheduled in 2021. Following the launch of Mero 2, the project is expected to add two further FPSOs of the same capacity, subject to approval by the partners. All four producing units will be deployed in the Northwestern part of the Libra block (Mero field), as the Central and South-East panels are under exploration until 2020.

The Libra Consortium is operated by Petrobras (40%) as part of an international partnership including Total (20%), Shell (20%), CNOOC Limited (10%) and CNPC (10%). Pré-Sal Petróleo (PPSA) manages the Libra Production Sharing Contract.