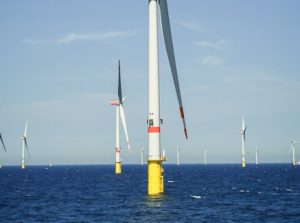 “The rapid progress on installation and commissioning was made possible by the dedication of our team, combined with excellent cooperation by all partners, especially the grid operator and the BSH licensing authority,” Mr Poulsen remarked. Installation of the 33 turbines began earlier this year and all turbines are expected to be delivering energy to the grid by the end of 2019, as per schedule. Once operational, Deutsche Bucht will produce 1.1 billion kilowatt hours of eco-friendly energy each year, meeting the demand of approximately 328,000 households. The renewable energy produced by Deutsche Bucht will save 740,0001t of greenhouse gas emissions.

“Northland prides itself on delivering projects on time and on budget. Achieving these goals is a significant accomplishment and a testament to our Deutsche Bucht project team and its partners”, notes Mike Crawley, President and CEO of Northland. “We look forward to adding 269MW to our existing portfolio of offshore wind capacity in Germany and are proud to support the German government in their efforts to create a more sustainable future through the continued transition to cleaner and greener energy.” Installation of the turbines began in early June. As of today, 21 of the turbines have been installed by the turbine manufacturer, MHI Vestas Offshore Wind. The final fabrication on the two innovative mono bucket foundations is currently ongoing at the Bladt Industries facilities at Lindoe, Denmark. Installation and cabling for the two mono bucket foundations and their turbines is planned for Q4. All 33 turbines are expected to be operational by the end of 2019.

Over the past few weeks, the installation and testing campaign for over 40km of internal cable was completed. The offshore substation of the windfarm was also successfully handed over to Northland by the Balance of Plant contractor Van Oord. The offshore substation had already been connected to the offshore converter station BorWin beta of grid operator TenneT, enabling the turbines to produce power. TenneT made a partial grid supply possible by connecting the first of the two 155kv export cables; a complete connection to the German high-voltage grid will occur later this year.