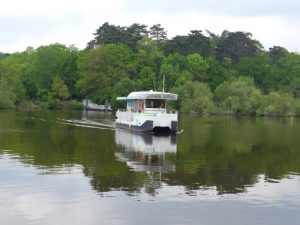 A new hydrogen fuel cell catamaran is now operational as a shuttle in the French city of Nantes. The Jules Verne 2 is a French first in terms of water transport because it is powered by two hydrogen fuel cells. The refuelling station for the shuttle has been installed on the shore of Port-Boyer.

The aluminium catamaran is 10m long en 3.8m wide and was built at the Navalu shipyard in Bouin, Vendée. It draws its energy from two 5kW fuel cells that convert the hydrogen stored on board into electricity. The project is the result of an initiative by the French Agency for the Environment and Energy Management ADEME which called for the development of the hydrogen sector. Jules Verne 2 is non-polluting, quieter and can carry 25 passengers and 10 bicycles on a three-minute crossing.