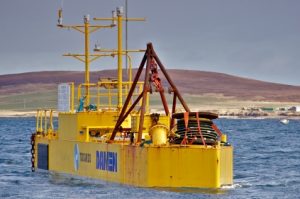 To elaborate on the importance and potential of marine energy for the Netherlands and what is needed politically to support this, Dutch Marine Energy Centre (DMEC) and Dutch Energy from Water Association (EWA) set up the position paper Energy from Water.

After discussions with Dutch members of Parliament, the position paper was presented at the debate on the Dutch climate agreement on 4 September to Dutch Minister of Economic Affairs and Climate, Eric Wiebes. As a positive outcome, the Minister and Commission agreed on drafting a Roadmap to Marine Energy.