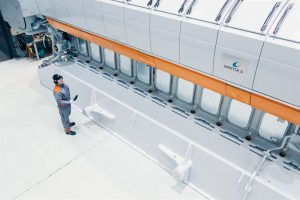 The technology group Wärtsilä launches the Wärtsilä 31SG pure gas engine for marine market applications. It is based on the successful Wärtsilä 31 product platform. The diesel version of the engine has been recognised by Guinness World Records as being the world’s most efficient 4-stroke diesel engine. The Wärtsilä 31SG engine further reduces the total cost of ownership and the environmental footprint for vessels operating in regions where there is a developed gas infrastructure. The commercial launch of the Wärtsilä 31SG takes place in September at the Gastech 2019 conference and exhibition being held in Houston, Texas, as well as at the Neva St. Petersburg exhibition and maritime forum in St.Petersburg, Russia.

Following Wärtsilä’s introduction of dual-fuel engine technology in the 1990s, LNG has become established as a viable and attractive marine fuel. This has led to the rapid expansion of the global LNG bunkering infrastructure, which sets the stage for the next evolutionary step, namely a larger scale application of pure gas engines within the marine and offshore industries.