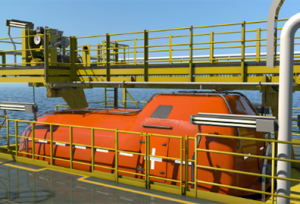 When Shell UK asked Survitec to increase lifeboat capacity on the Shearwater gas hub by more than 22%, the company rose to the challenge. Its solution was to replace the existing three 49-person capacity lifeboats, with three 60-person lifeboats taking the total capacity from 147 to 180.

The project came with several challenges, such as the lack of crane coverage and a compressed project delivery schedule. As Survitec’s 60-person lifeboats are larger than the existing boats, the existing davits were too small for the new inventory so had to be replaced. The marine offshore safety specialist had only a two-month window in which to deliver, install and commission the new equipment.

Access was also tricky. The position of the lifeboats on the hub did not allow for crane access, and hot work on site was prohibited. Further, only one lifeboat at a time could be taken out of service, adding to the logistical complexity to the project.

Marc McEwan, Head of Projects, Survitec, said: “We knew from the outset that this was a challenging project that needed a different approach to meet the tight timeline. Allocating the right resources from the start were key to the project’s success.  Crane access to the site was limited, so we also had to gather the correct information and detail to enable the overall plan to develop before we installed the davits and rolled out the lifeboats in the two-month window.”

Survitec’s first step was to carry out a 3D survey of the Shearwater platform to better understand the layout of the site and any access limitations. The three lifeboats would sit in the same location as the existing boats, parallel to each other along one side of the hub.

The 3D survey, however, showed that new longer davit maintenance platforms were required to support the larger lifeboat. These new top sections were designed, fabricated and tested onshore by Survitec over a four-week period, witnessed and approved by Lloyd’s Register.

During the installation phase Survitec worked in tandem with Zenith Structural who developed a bespoke lifting arrangement to get the new top sections and ancillary equipment into position for final installation.

McEwan said: “Moving both the davit top sections and lifeboats into their positions was one of the more complicated aspects of the operation, but Shell UK’s team of technicians and the wider support team were brilliant to work with and completely understood the platform’s access limitations and the North Sea weather.”