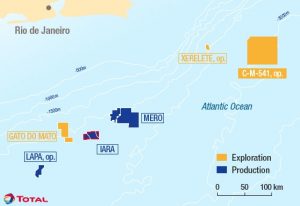 Total announce first oil from the Iara license (Block BM-S-11A), located in the deepwater Santos Basin pre-salt. This marks the start-up of the FPSO P-68, the first of the two floating production, storage and offloading units (FPSO) already launched and to be installed on the license. The second, the P-70, is expected to come on stream in 2020. Each unit has a capacity of 150,000 barrels of oil per day.

“First oil from Iara is a new milestone for Total in Brazil. It increases our share of production from the highly prolific pre-salt area, adding to current output from the Total-operated Lapa field, and the extended well tests under way on the Mero field,” says Arnaud Breuillac, President Exploration & Production at Total. The Iara license comprises the Sururu, Berbigão and Oeste de Atapu fields. Total acquired a working interest of 22.5% in Block BM-S-11A on 12 January, 2018 as part of the strategic alliance with Petrobras, becoming a partner alongside operator Petrobras (42.5%), Shell Brasil Petróleo (25%) and Petrogal Brasil (10%).

Total has been present in Brazil for over 40 years and has more than 3,000 employees in the country. The Group operates in all segments: exploration and production, gas, renewable energies, lubricants, chemicals, and distribution.Total Exploration & Production’s portfolio currently includes 23 blocks, with nine operated. In 2018, the Group’s production in the country averaged 19,000 barrels of oil per day. By 2025, Total’s production should exceed 100,000 barrels of oil per day.