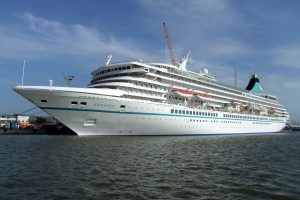 Lloyd Werft Bremerhaven is expecting Phoenix Reisen’s 213m long cruise ship Artania to arrive in its Kaiserdock II for a stay lasting about three weeks. Along with routine class work more than 250 cabins will be overhauled by the owner. The Phoenix Reisen flagship is scheduled to leave the shipyard around December 6, for its next cruise.

“This order suits us well”, said Yard Head Rüdiger Pallentin, “And it is, to boot, a fine recommendation for the good work we carry out at the Lloyd Werft.”

Along with the maintenance and classification work being done by Lloyd Werft, modernisation in the hotel and cabin sectors is being carried out directly by the owners. That work, which includes the Pacific Lounge and Jamaica Club, has been put out to tender by the owners. In addition, carpets, furnishings, wallpapers and many other items are being refurbished and newly designed in more than 200 cabins and public areas. Lloyd Werft is lending logistical support to this work.

Built in 1984 in Helsinki as Royal Princess for Princess Cruises and named at that time by Princess Diana, the cruise ship was owned by P&O Cruises between 2005 and 2011 as Artemis. In April 2011 it was sold to V Ships subsidiary Artania GmbH and has been in charter since then with the German-speaking travel company Phoenix Reisen. Following the acquisition by its new owner the ship underwent a comprehensive conversion lasting four weeks in the spring of 2011 at Lloyd Werft in Bremerhaven. Five years ago, four new energy-efficient Wärtsilä main engines were installed on the Artania as part of a further comprehensive yard stay at Lloyd Werft.

The upcoming new contract will mark the fourth occasion on which Lloyd Werft Project Manager Jochen Mehrtens has been involved with this particular cruise ship. “At peak times, I can see as many as 120 yard employees taking part in this project”, he said. “Added to them will be a colourful array of local supply companies. For those of our employees who are involved currently in a parallel yacht newbuilding project, this contract will come as a welcome change, because we are, after all, a classic repair and conversion shipyard.”

The 44,588 GT Artania, which accommodates 1,260 passengers, will initially call at the Columbus Cruise Centre after ending a cruise to the Canaries and western Europe on 17 November. After the passengers and a large part of the crew have left the ship, Artania will be towed by tugs to the nearby Lloyd Werft Bremerhaven. During the weeks that follow, the team from Lloyd Werft will, among other things, renew ventilation shafts and hull anodes. Along with steel repairs to the outer hull and tank top plate areas, exhaust pipes will also be renewed, tanks cleaned, and outboard fittings and diverse valves overhauled and the electric motors and the pre-heater on the fuel injection plant serviced. The ship will also be washed, and conservation undertaken – no mean task considering the area being worked is covers about 10,000 square metres. In addition the yard is responsible for organising the logistics for the conversion of cabins and for further logistical tasks.

The comprehensive work on the Artania must be completed by the beginning of December, when the ship is scheduled to begin its first pre-Christmas journey along the English Channel.