In a second contract for another major oil and gas company, the ROV hooks were again used to install a rigid M-shape jumper and associated subsea distribution hardware. Here, the hooks were used to make several smaller lifts of ancillary equipment and frames, weighing between 2,500kg and 4,500kg, in support of the jumper installation using MSV Cade Candies. Dan Cheek, Engineering Manager Subsea Projects Group at Oceaneering, says, “We were looking for a safe and time-efficient solution to connect and disconnect loads subsea using a ROV. We needed something to reduce the risk of dropped objects, especially when passing through the water interface, and provide a user-friendly subsea solution. The alternative option would have been to use a ROV shackle in place of a ROV hook.”

The LBL Compatts allow for detailed acoustic positioning of subsea assets by surface vessels and tracking of the ROVs. Mr Cheek explains that the frames hold the transponders upright subsea and off the seabed. Ruben Delgadillo, Regional Sales Manager at LiftPull, says, “The safe lifting and lowering of loads on deck and underwater up to depths of up to 3,000m, coupled with ambient conditions, unpredictable currents and difficult lighting, presents enormous challenges. Further, the sector is nearly always time pressured and precision is always fundamental to safety.” He adds, “The new RUD ROV hook provides two efficient lifting solutions for demanding marine and offshore applications. Its innovative safety mechanism makes it impossible to accidentally open the hook. We serve as a DNV GL-qualified partner for marine and offshore applications with a comprehensive range of sling and lashing solutions.”

RUD also offers a higher capacity, 25t version of the ROV hook. Mr Cheek explains, “We intend to use the 10t capacity hook for upcoming contracts. It is especially useful for deploying and recovering the ancillary equipment and frames required to complete many of our projects. However, we are also excited about the 25t version and see potential use for it on future assignments.”

For approximately eighteen months, The Caldwell Group and the RUD Group have united their sales and marketing activities in North America for material handling and lifting devices within a common organization. 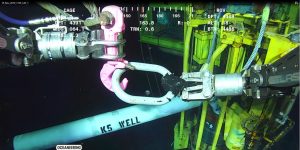