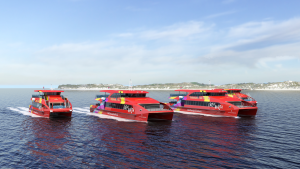 UK shipbuilder Wight Shipyard has secured an order for four fast ferries from Malta’s tourism Leaders, Captain Morgan. The order consists of four new build vessels, two 20m and two 33m catamarans, all to be designed by One2Three Naval Architects. They will be built for Captain Morgan Holdings, a subsidiary of Fortina Investments.

Peter Morton, CEO, Wight Shipyard, said: “We have been working with One2Three to develop lighter, more fuel-efficient ferries with the subsequent reduction of fuel costs.  The operators see the long-term benefits in using less fuel and thereby reducing carbon emissions. We are also working to integrate the boarding design for the ancient wharves and docks of the towns of Malta.”

Familiar design
The two new build 20m harbour waterbus vessels will replace a number of older vessels, which already service the harbour routes. They will be designed to service the low wharves at each harbour providing easy embarkation and debarkation for passengers while cruising around the harbour.

These vessels will be of a similar design to Wight Shipyard’s Loch Ness Jacobite Maverick 20m day cruise passenger catamaran, also designed by One2Three Naval Architects. The new 20m design is a slower harbour waterbus designed for going point to point around the main ports of the capital.

Fortina Investments CEO Edward Zammit Tabona said: “We are very excited about this venture and collaboration with Wight Shipyard, which is renowned for its high standards and attention to detail. We are looking forward to launching these vessels in Malta’s seas in May 2020, which will see Captain Morgan Group take its sea and land transport services to another level.”

These vessels form an integral part of Fortina Investments’ innovative iSeeMalta concept, which provides visitors with access through a single pass to the ferry service, City Sightseeing buses, public transport as well as museums, Heritage Malta sites, entertainment spots and other attractions.

Tried and tested
The two 33m medium speed vessels are a new design for Wight Shipyard, based on a commuter boat currently used on Sydney harbour.

Strength to strength
Wight Shipyard Co. has recorded exceptional success in the fast ferry sector since its inception, and this latest order will take the yard to thirteen new builds in just over four years. Previous notable builds include the renovation of the historic motor yacht MY Shemara, Red Funnel’s Red Jet 6 and 7, three MBNA Thames Clippers, the Jacobite Maverick in Scotland, the Twin City Liner commuter and sightseeing vessel on the River Danube, and most recently two fast ferries delivered this summer for Mexico’s largest ferry operator Ultramar.