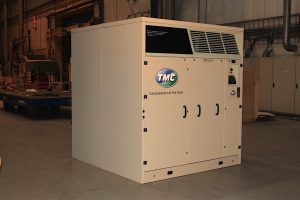 TMC Compressors of the Seas (TMC) has been awarded a contract by Hyundai Heavy Industries to deliver its air lubrication system compressors to seven LNG carriers the Korean shipbuilder is constructing for Capital Gas Corp.

TMC has developed a range of marine compressors for use in combination with air lubrication systems (ALS) to help ships further reduce fuel consumption and emissions to air.

Under the contract, TMC will supply three marine ALS compressors to each of the seven LNG carriers, in total 21 compressor units. TMC will also provide its ALS control system that is integrated in a specially designed control cabinet. TMC has not disclosed the value of the contract.

The equipment will be manufactured in Norway and shipped to Hyundai Heavy Industries in Korea. “During the past 15 years, we have more or less constantly tried to identify new ways of reducing energy consumption and the environmental footprint of our compressors,” says Hans Petter Tanum, TMC’s director of sales and business development. “Identifying new usage areas for our compressors, such as ALS, is part of our commitment to making shipping greener. Landing such a significant contract with Hyundai Heavy Industries is a fantastic seal of approval for our new range of ALS compressors.”

TMC’s marine compressed air systems for ALS will be coupled with the Hi-ALS system to generate the required stream of air bubbles that passes continuously beneath the ship’s surface, thereby reducing frictional resistance between the hull and the seawater and producing the desired energy-saving effect.

“Given the significant operational cost savings that ALS offer shipowners, we expect this technology to become mainstream in the coming decade. To play a part in this trend through our marine compressor technology is certainly one of our key objectives going forward,” adds Hans Petter Tanum.