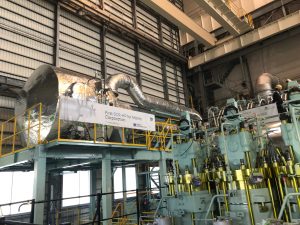 SCR-HP cluster 3 mounted on the engine during engine shop test.

Makita Corporation and MAN Energy Solutions have announced that the first ever PBST-branded and -built cluster-3 SCR-HP system has passed its ClassNK approval test at the MAKITA works in Japan.

The most compact of its type in the market, the SCR system is one of four – originally ordered in 2018 and 2019 – for vessels featuring MAN B&W two-stroke engines with two now delivered and the others currently en route to customers. An MAN B&W 6S46ME-B8.5 engine will power each vessel, with the SCR-HP system making each vessel Tier III-compatible. The first engine was ordered by Kanax Corporation and installed in a newly developed 39,000-dwt bulk carrier built at Shin Kurushima Toyohashi Shipbuilding.

Mr Klaunig said: “The results from the engine shop test were quite spectacular with the PBST SCR-HP system able to undercut the currently valid IMO III NOx values of 3.4g/kWh by more than 1g/kWh, which compares very favorably with the rest of the market. Working closely with Makita, just a little over a year passed between landing the first order and the handing over of the engine with the SCR-HP system to the shipyard. Accordingly, I would like to thank Makita for its great cooperation in delivering such a quick turnaround.”

Mr Makita added: “We express sincere gratitude to everyone involved in this project at MAN and PBST for the excellent support and cooperation which lead to the successful launch of the world’s first MAN SCR-HP. Representatives of our client, Toyohashi Shipyard, were quite satisfied with what we have achieved. Now we are able to offer a strong and environmentally friendly Makita Mitsui MAN-B&W engine, even in the current, tough market.”