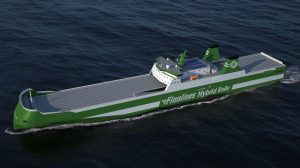 Technology group Wärtsilä will supply its Hybrid Power Conversion system for three new RoRo ferries being built at the Nanjing Jinling shipyard in China for Finnlines, a part of the Italian Grimaldi Group. The order with Wärtsilä was placed in Q4 2019.

The hybrid solution, which includes a 5000kWh energy storage system, will enable these ships to operate with zero emissions while in port, and to meet the Registro Italiano Navale (RINA) Green Plus class notation. They will also have Ice Class classification 1A Super.

“Wärtsilä’s Smart Marine approach to technology development aims at delivering highly efficient solutions with minimal impact on the environment. This order is one more example of how we turn this approach into practical and reliable reality,” says Mikael Lindholm, Head of Newbuilding Department, Finnlines.

“These new ferries will be among the most environmentally sustainable ships of their type. Finnlines is a frontrunner in the development of hybrid power ships, of marine battery packs and of energy management systems. By investing in research & development and by teaming with its suppliers, Finnlines aims at meeting well on time all the ambitious environmental targets set by the IMO and by the international community for shipping,” says Emanuele Grimaldi, CEO of Finnlines.

Wärtsilä’s equipment, which also includes in-line shaft generators, power take-off/take in converters, and transformers, is scheduled for delivery to the yard in the second half of 2020. The 238m long vessels will serve Finnlines’ routes.